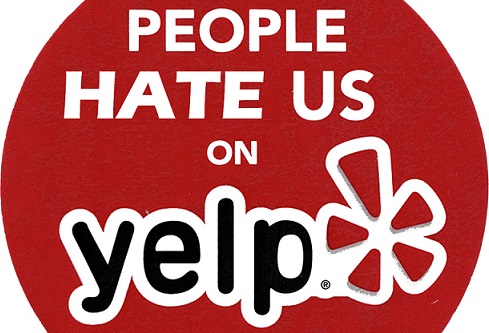 Since 2006, some of Yelp’s sales people have been blackmailing, extorting and committing fraud on small businesses. And still to this day, Yelp does nothing about it and pretends the problem doesn’t exist.

The following is a very typical story that I’m sure a lot of small business owners are familiar with. One of my clients had 3 negative reviews published on their Yelp page (which one was left by a competitor over the weekend). Then they have 8 positive reviews that are “filtered”, meaning they’re hidden. And on a pretty regular basis, my client will get calls from Yelp sales reps. Just today, he got a call from a Yelp sales person that said if my client pays for Yelp advertising he could “probably help with unhiding the positive reviews”.

Now, Yelp isn’t the only company that has sales reps that will say anything and do anything to make a sale. Unfortunately in this case, these Yelp employees have way more leverage than the typical sales person.

So can Yelp employees actually decide which reviews get filtered and hidden? The answer is no, they have no access whatsoever. They can’t control which reviews get filtered no more than you or me. So when they say that they can, they’re not being honest. All you’ll get is Yelp advertising. So the Yelp sales reps are blackmailing and scamming small businesses into paying for something they can’t deliver.

But it gets worse. I’ve seen other cases where some Yelp employees will actually submit negative reviews themselves onto a small business’ Yelp page. Then call them up saying if they pay for Yelp advertising, they can somehow get the positive review removed. And then they simply delete the negative review they created themselves after the small business puts their deposit in for Yelp advertising.

And of course Yelp’s management denies any knowledge that their sales people are doing any of this. And they can deny all they want. But it doesn’t change the fact that if you were hired on at Yelp to sell their advertising, it would be very easy to lie to small business owners saying you can remove their bad reviews if you sign up. And it would very easy to post negative reviews yourself and only remove them if the small business owner pays.

It’s inexcusable that Yelp has not done anything about this problem. These bad reviews damage businesses severely and can sometimes hurt word of mouth business and referrals. But they just bury their heads in the sand like the problem doesn’t exist. Yet, countless small business owners all across the country have almost identical stories of what people from Yelp say to them.

I normally don’t pitch our services at Customwave on my blog posts, but if you’re one of those small business owners that had bad reviews on Yelp and are interested in getting help, you can contact me at chris@customwave.net or call me at the Customwave office at (877) 638-0827.